DrivSafe has built and patented its auto insurance telematics technology leveraging smartphones to collect and display driving behavior information. As the penetration of smartphones grows among the US population, DrivSafe would automatically increase its reach.

If the current rate of growth were to continue, smartphone penetration would reach 90+% over the next 2-3 years.

Today there are more Android based smartphones than all other smartphones combined including i-Phones, Blackberry and Windows. According to Nielsen Research, Android has 52% of the smartphone market share.

Email enabled phones have been around for many years now but the true smartphone revolution was started by Apple with the launch of its flagship i-Phone series in 2007. Three years after the first i-Phone launch, Google introduced its first Android platform smartphone in 2010.

“The present day smartphones have more computing power that all of NASA in 1969, when it placed two astronauts on moon” 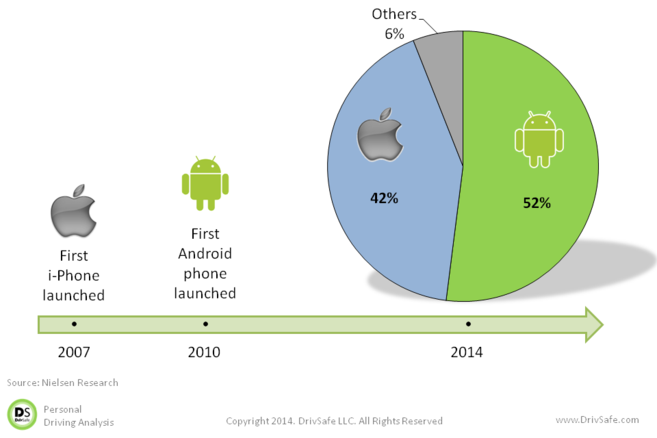 Pew research estimates that smartphone penetration is much higher among younger population. 85% of the people between the age of 16-25 years have a smartphone compared to <50% of the people over age of 65 years.

Smartphone penetration has reached ~70% - will continue to grow

DrivSafe unlocks the potential of smartphones 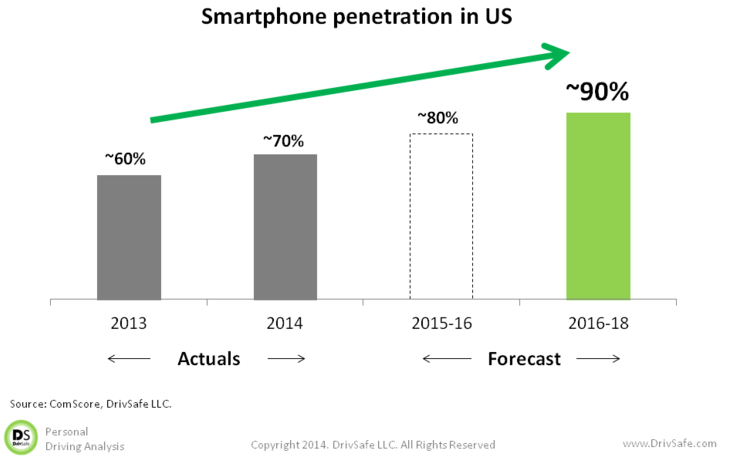 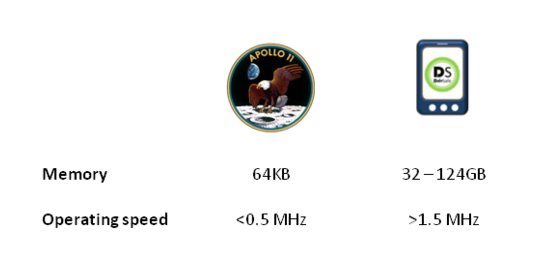 Smartphone penetration would reach ~90% in the next 2-3 years

Comparison of smartphone and apollo 11 operating speed and memory

Further, smartphones today have onboard display, internet, camera, GPS and many other capabilities making them an “all-in-one super-machine” in our palms and an ideal candidate for many applications including insurance telematics. DrivSafe smartphone telematics app takes advantage of these capabilities to produce and analyze comprehensive driver behavior data for the auto insurance industry.